The Bylaws of the Association of Louisiana Bail Underwriters is as follows:

Article I.  Membership
Section 1.  The members of this corporation shall consist of persons in the surety and bail industry. Membership shall be divided into three classes:

The President shall have the sole authority in hiring and firing of employees other than officers, and the granting and accepting of leases, in buying of all equipment and fixtures of the Corporation, and generally in all matters having to do with the normal day to day operation of the business, reserving the other officers and the Board of Directors those powers delegated to them by law and those reserved to them herein.

Vice President: In the absence of the President or in case of the President's inability to act, the Vice President shall perform all the duties of the President. He shall assist the President in all corporate matters requested.
Secretary: The Secretary shall give notice of all meetings of the shareholders, and record all votes and the minutes of all proceedings in a book to be kept for that purpose; and shall perform like duties for the standing committees when required. He shall keep in safe custody the seal of the Corporation and, when authorized by the Board of Directors, affix the same to any instrument requiring it, and when so affixed it shall be attested by his signature. He shall perform such other duties as may be prescribed by the Board of Directors under whose supervision he shall be. He shall be sworn to the faithful discharge of his duties.
Treasurer: The Treasurer shall have charge of all funds of the corporation and of their disbursement under the direction of the Board of Directors. The Treasurer shall keep a record of all monies received and paid out and make a report of the same to the Board of Directors at each regular meeting thereof or whenever requested to do so. The Treasurer, the President, or their Designee shall sign all checks, drafts and notes on behalf of the corporation.
Section 2. The compensation of all officers shall be fixed by the Board of Directors.
Section 3. The Board may appoint such other officers, members, and agents as it shall deem necessary, who shall hold their offices for such terms and shall exercise such powers and perform such duties as shall be determined from time to time by the Board.
Section 4. The Board shall schedule a bi-annual election of officers, the results of which is to be announced at the annual membership meeting. A simple majority of a quorum present for a meeting of the Board of Directors, with proper notice, shall be sufficient to elect or remove officers. Provided, however, that no change of the time or place for election of directors shall be made within thirty (30) days preceding the day on which such election is to be held. In case of any change of such time or place, written notice thereof shall be given to each director by letter or electronic means, at least twenty (20) days before the election is held.
Section 5. The officers of the corporation shall hold office until their successors are chosen and qualify in their stead. Any officer elected or appointed by the Board of Directors may be removed at any time by the affirmative vote of a majority of the whole Board of Directors. If the office of any officer or officers become vacant for any reason, the vacancy shall be filled by the affirmative vote of a majority of the Board of Directors.
Section 6. In the case of the absence of any officer of the corporation other than the President, or for any other reason that the Board may deem sufficient as to any officer other than the President, the Board may delegate, for the time being, the powers or duties, or any of them, of such officer to any other officer, or to any director, provided a majority of the entire Board concurs therein.
Article III.  Board of Directors
Section 1.  The Board of Directors shall be composed of individuals elected bi-annually at the annual meeting of the members on even-numbered years. The Board shall be composed of fifteen (15) persons. These fifteen persons shall be elected in the following manner:
a. All members of the Board of Directors shall be members of the Agent class. Thirteen members shall be elected from the eight geographical districts as defined and enumerated by these Bylaws, and two at-large members shall be elected from any of the eight geographical districts.
b. Should the Board of Directors determine a need to add additional board members beyond the fifteen (15) enumerated in these Bylaws, they may present additional board members for election at the annual meeting via ballot. These additional members may be elected from any of the eight geographical districts as determined by the Board of Directors.
c. Voting Rights for Geographical Districts – the eight (8) geographical districts shall be comprised of the following parishes:
District 1 – Two (2) board representatives. Bienville, Bossier, Caddo, Clairborne, DeSoto, Red River, and Webster;
District 2 – Two (2) board representatives. Caldwell, East Carroll, Franklin, Jackson, Lincoln, Madison, Morehouse, Ouachita, Richland, Tensas, Union, and West Carroll;
District 3 – One (1) board representative. Avoyelles, Catahoula, Concordia, Grant, LaSalle, Natchitoches, Rapides, Sabine, Vernon, and Winn;
District 4 – One (1) board representative. Allen, Beauregard, Calcasieu, Cameron, Jefferson Davis, and Vermilion;
District 5 – Two (2) board representatives. Acadia, Evangeline, Iberia, Lafayette, St. Landry, St. Martin, and St. Mary;
District 6 – Two (2) board representatives. Ascension, East Baton Rouge, East Feliciana, Iberville, Livingston, Pointe Coupee, St. Helena, Tangipahoa, Washington, West Baton Rouge, and West Feliciana;
District 7 – One (1) board representative. Assumption, Lafourche, St. Charles, St. James, St. John the Baptist, and Terrebonne;
District 8 – Two (2) board representatives. Jefferson, Orleans, Plaquemines, St. Bernard, and St. Tammany.
Section 2. In the event of an Officer's or a Director's inability to serve due to death, resignation, or other means of vacancy, the office shall be declared vacant, and the Board of Directors shall elect a replacement from the same district or position to serve until the next regular election.

Section 3.  The Board of Directors shall be charged with the management of all of the affairs of the corporation, subject to the provisions of its Articles of Incorporation and By-Laws. To the extent not prohibited by La.R.S. 12:121, the Board of Directors shall have sole authority in the buying, selling and mortgaging of real estate and the disposition of the assets of the corporation.
Section 4.  For the purpose of transacting the business of this corporation during the intervals between the meeting of the Board of Directors, the President, the Vice President, the Secretary, and the Treasurer shall constitute the Executive Committee, with full authority to act.
Section 5.  Regular meetings of the Board of Directors shall be held at such time and place as the directors shall determine. Special meetings of the Board may be called by the President on three (3) days' notice to each director, either personally or by written notice by mail or electronic means. Special meetings shall be called by the President or Secretary in like manner and on like notice on the written or electronic request of one director. Regular or Special meetings may be held physically or by electronic means (including videoconference and teleconference).
Section 6.  One more than half of the current number of directors shall constitute a quorum of the Board.
Section 7.  In addition to the powers and authorities by these By-laws expressly conferred upon it, the Board of Directions may exercise all such powers of the Corporation and do all such lawful acts and things as are not by statute or by the Articles of Incorporation or by these By-laws directed or required to be exercised or done by the members or by the President.
Section 8.  The Corporation shall indemnify and hold harmless each director and officer now or hereafter being or having heretofore been a Director of Officer of the Corporation and/or by reason of his alleged acts or omissions as such Director or Officer, whether he continues to be such Officer or Director at the time when any such claim or liability is asserted, and shall reimburse each Director and Officer for all legal and other expenses reasonably incurred by him in connection with defending any and all such claims or liabilities, including amounts paid or agreed to be paid in connection with reasonable settlements made before final adjunction with the approval of the Board of Directors, whether he continues to be such Director or Officer shall be indemnified against or reimburse for any expenses incurred in defending any of all such claims or liability in settling the same unless in the judgement of the Directors of the Corporation the Director or Officer against whom such claim or liability is asserted has not been guilty of negligence or willful misconduct. The foregoing right of indemnification shall not be exclusive of other rights to which any Director of Officer may be entitled as a matter of law.

Article III.  Voting Rights
Section 1.  Those members in good standing belonging to the Agent or Surety Company class of membership shall have the right to cast their votes for the election of Directors, the amendment of the By-laws or articles or for any other voting purpose in person at any annual or special meeting, by official mail or electronic ballot prepared by the Board of Directors and Officers for the purpose of voting for any purpose wherein the Directors allow voting by mail or electronic ballot. No vote shall be disqualified so long as the member is in good standing and the ballot has been properly executed.
Section 2.  In the event balloting is used, a representative who is not at current member of the Board of Directors, shall be appointed by the Board of Directors, to verify the election results and report the results of the balloting to the Board and the general membership. That person appointed to verify and report on balloting shall be designated as the election committee.
Section 3.  The Board of Directors shall approve of the form of ballot used prior to the election being held by ballot.
Article IV.  Amendments
With thirty (3) days notice, these By-Laws may be altered or amended or repealed by the affirmative vote or written consent of a majority of the members entitled to vote at the annual membership meeting, as defined in Article I, Section 4.

The Association of Louisiana Bail Underwriters represents bail agents and the bail profession across the state of Louisiana. To find out more about our organization, please visit here or contact the ALBU office at (225) 685-1151 or ALBU@tatmangroup.com. 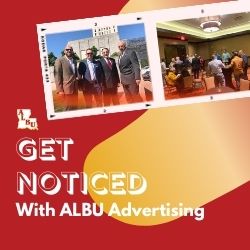